My Name is Lucy Barton

The play will be released as an audiobook on 4 Feb, read by Laura Linney.

Unsteady after an operation, Lucy Barton wakes to find her mother sitting at the foot of her bed. She hasn’t seen her in years, and her visit brings back to Lucy her desperate rural childhood, and her escape to New York. As she begins to find herself as a writer, she is still gripped by the urgent complexities of family life.

“Deeply affecting, heartbreaking. A powerful storyteller immersed in the nuances of human relationships, weaving family tapestries with compassion, wisdom and insight.” The Observer

This is special. A magical performance. Deeply sensitive and beautifully modulated. Extraordinary and wonderful.

Length
About 90 minutes, with no interval.

Bringing Lucy Barton to the Stage

RM Hullo Elizabeth. The plan of interviewing you by email sounded like a great idea until I sat down here to start this conversation, I realised there are things I might like to ask you when we meet, and there are certainly things I want to ask … 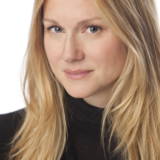 Theatre Laura Linney returned to Broadway this year in the Manhattan Theatre Club’s revival of Lillian Hellman’s The Little Foxes, for which she received a Tony nomination for Best Performance by an Actress in a Leading Role in a Play. She has appeared in many other Broadway productions, most notably Time Stands Still and Sight Unseen, both directed by Daniel Sullivan and written by Donald Margulies. Additional credits include Arthur Miller’s The Crucible (directed by Richard Eyre), Six Degrees of Separation, Honour, Uncle Vanya, Les Liaisons Dangereuses, Holiday and The Seagull.

Television She will reprise her role as Mary Ann Singleton in a new 10-episode instalment of Amistead Maupin’s Tales of the City for Netflix. In its second season for Netflix, Linney stars in Ozark, alongside Jason Bateman, which is to be released later in 2018. Linney starred in and produced the series The Big C for four seasons, for which she won several awards. She also won multiple awards for her portrayal of Abigail Adams in the HBO miniseries John Adams, directed by Tom Hooper. She played Kelsey Grammer’s final girlfriend in the last six episodes of Frasier, was directed by Stanley Donen in Love Letters, and starred opposite Joanne Woodward in Blind Spot.

Film includes The Dinner, Nocturnal Animals, Sully, Genius, Teenage Mutant Ninja Turtles: Out of the Shadows, Mr Holmes, Hyde Park on Hudson, The Details, Morning, The Savages, The Hottest State, The Squid and the Whale, Kinsey, P.S., Love Actually, Mystic River, The Life of David Gale, The Mothman Prophecies, You Can Count on Me, The House of Mirth, The Truman Show, Absolute Power, Primal Fear, Congo and Lorenzo’s Oil, among
many others.

Awards Linney has been nominated three times for an Academy Award, four times for a Tony Award, once for a BAFTA Award, and five times for a Golden Globe. She has won a SAG Award, one National Board of Review Award, two Golden Globes and four Emmy Awards. She holds two honorary Doctorates from her alma maters, Brown University and The Juilliard School.

Theatre includes Hamlet, Kafka’s Dick and Edmond at the Royal Court; Comedians, Guys and Dolls, The Beggar’s Opera, The Government Inspector, The Futurists, The Changeling, The Voysey Inheritance, Racing Demon, Richard III, Night of the Iguana, White Chameleon, Skylight, Napoli Milionaria, Sweet Bird of Youth, The Absence of War, John Gabriel Borkman, The Prince’s Play, Amy’s View, King Lear, The Invention of Love, Vincent in Brixton, The Reporter, The Observer, Welcome to Thebes and Liolà at the National Theatre; The Crucible on Broadway; Mary Poppins in the West End and on Broadway; A Flea in Her Ear at the Old Vic; The Last of the Duchess at Hampstead; The Judas Kiss and The Dark Earth and the Light Sky, and his own adaptations of Les Mains Sales, Hedda Gabler, Ghosts and Little Eyolf at the Almeida; Private Lives, Betty Blue Eyes, Quartermaine’s Terms, Stephen Ward and Mr Foote’s Other Leg in the West End; The Last Cigarette, The Pajama Game and The Stepmother at Chichester; and Long Day’s Journey into Night for Bristol Old Vic and the West End.

Film includes The Ploughman’s Lunch, Iris, Stage Beauty, Notes on a Scandal, The Other Man and The Children Act.

Writing Utopia and Other Places – a memoir; National Service – a journal of his time at the National Theatre; Talking Theatre – conversations with theatre people; What Do I Know? – a collection of essays; and Place to Place – a collection of poems.

He was Director of Nottingham Playhouse from 1973 to 1978; Producer of Play for Today for BBC TV from 1978 to 1981; and Director of the National Theatre from 1988 to 1997. He has received numerous theatre and film awards and is a Fellow of the Royal Society of Literature. He was knighted in 1997 and was made a Companion of Honour in 2017.

Elizabeth Strout is the Pulitzer Prize-winning author of Olive Kitteridge; the number one New York Times bestseller My Name Is Lucy Barton (longlisted for the Man Booker Prize 2016); The Burgess Boys, a New York Times bestseller; Abide with Me, a national bestseller and Book Sense pick; and Amy and Isabelle, which won the Los Angeles Times Art Seidenbaum Award for First Fiction and the Chicago Tribune Heartland Prize. Her most recent book, Anything is Possible, was a New York Times bestseller and named one of the best books of the year by the New York Times Book Review, USA Today, and The Washington Post, among other publications. She has also been a finalist for the PEN/Faulkner Award and the Orange Prize for Fiction (now the Women’s Prize for Fiction) in the UK. Her short stories have been published in a number of magazines, including The New Yorker and O: The Oprah Magazine. Elizabeth Strout lives in New York City. The sequel to Olive Kitteridge – Olive, Again – will be published in September 2019.

Theatre includes The James Plays, a trilogy of award-winning plays produced by National Theatre Scotland, the National Theatre of Great Britain and Edinburgh International Festival; Scuttlers for the Royal Exchange, Manchester; Little Eagles for the RSC; The Last Witch for Edinburgh International Festival; and Iron for the Traverse, Edinburgh, for which she won the John Whiting Award in 2003.

Television includes the BAFTA-nominated Bumping the Odds and Rehab. She is the only writer so far to have contributed episodes to both the classic and contemporary series of Dr Who.

Theatre Bob Crowley’s designs for the National Theatre include Pinocchio, Collaborators, Travelling Light, The Habit of Art, The Power of Yes, Phèdre, Every Good Boy Deserves Favour, Gethsemane, Fram (also Co-Director), The History Boys (also Broadway, Tony Award) and Mourning Becomes Electra; for the RSC, more than 25 productions, including Les Liaisons Dangereuses and The Plantagenets (Olivier Award). On Broadway, The Glass Menagerie (also West End), Carousel (Tony Award), The Capeman, Sweet Smell of Success, Disney’s Aladdin (also West End), Aida (Tony Award), Tarzan (also directed), Mary Poppins (Tony Award), The Year of Magical Thinking, The Coast of Utopia  (Tony Award) and Once (Tony Award). Other stage designs include Allelujah! at The Bridge; The Inheritance; The Moderate Soprano; An American in Paris on Broadway and in London and Paris (Tony and Olivier Awards); The Audience in the West End and on Broadway; Skylight in the West End and on Broadway; Great Scott for Dallas Opera; Alice’s Adventures in Wonderland, The Winter’s Tale and Strapless for the Royal Ballet; The Cunning Little Vixen for le Châtelet; and Don Carlo and La Traviata for the Royal Opera.

Awards  He received The Royal Designer for Industry Award and the Robert L.B. Tobin Award for Lifetime Achievement in Theatrical Design.

John Leonard started work in theatre sound 46 years ago, during which time he has provided soundtracks for theatres all over the world. His most recent theatre includes: Sleeping Beauty at the Theatre Royal, Stratford East, Corrido: A Ballad for the Brave at the Victoria & Albert Museum; Mood Music at the Old Vic, Long Day’s Journey into Night at Bristol Old Vic, West End, New York & Los Angeles; My Name is Lucy Barton at Bridge Theatre, Present Laughter and In Praise of Love at Bath Theatre Royal & Ustinov Studio & The Real Thing for Bath Theatre on tour; The Stepmother at Minerva Theatre, Chichester; The Retreat, Beirut and The Other Place at the Park Theatre; All Our Children, at the Jermyn Street Theatre; Duet for One, UK tour; Consent, Waste, Detroit, Grief, Untold Stories: Cocktail Sticks, 2000 Years, England People Very Nice, Much Ado About Nothing, London Assurance and Rocket to the Moon at the National Theatre; The Heresy of Love for the Royal Shakespeare Company; Macbeth at Shakespeare’s Globe; The Dark Earth and the Light Sky, The Master Builder, Little Eyolf and Ghosts (also West End and New York) at the Almeida; Into the Woods at the Royal Exchange, Manchester; The BFG at Birmingham Rep; Birthday and Tribes at the Royal Court; Prism, Cell Mates, The Firm, Mother Christmas, Stevie, Farewell To The Theatre, Lawrence After Arabia, Ken and Mr. Foote’s Other Leg (also West End) at Hampstead; Lady Windermere’s Fan, The Libertine, Dead Funny, Hand To God, The Duck House, Just Jim Dale, Firebird and McQueen (West End).

He has written an acclaimed guide to theatre sound, is the recipient of Drama Desk, LDI Sound Designer Of The Year and USITT Distinguished Career awards and is a Fellow of the Guildhall School of Music and Drama, a Companion of the Liverpool Institute for Performing Arts and an Honorary Fellow of the Hong Kong Academy of Performing Arts.